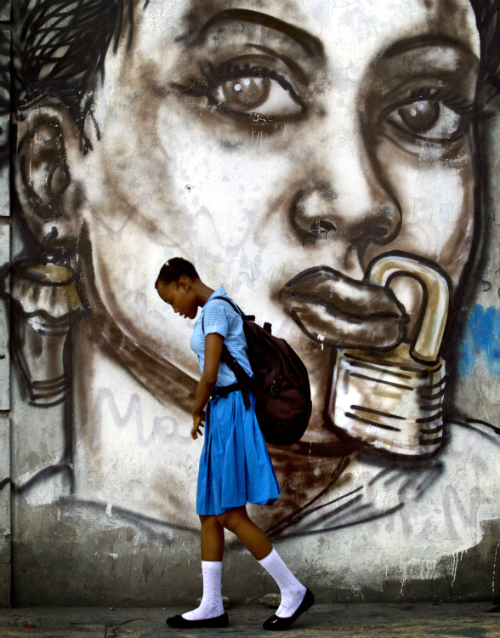 We met in our teens at an all-girls high school run by Catholic nuns, and today we are women with gratifying careers. One of us is a partner in a prominent Haitian law firm owned by women; the other is a high-ranking diplomat based in Asia; and I am the co-owner of Ayiti Nexus. We keep in touch via a group chat where we regularly share jokes and our life episodes. We were recently prompted upon reading a newspaper article to exchange our thoughts on gender discrimination within our fields and discuss how we experience it from opposite sides of the world. We agreed that gender imbalance remains an issue everywhere and I came to the realization that the early start of my contribution to society led to my fulfillment as a woman in the workplace, and to the success of my company.

«An increasing number of men who feel intimidated by the success of women in society are suffering from burn-out syndrome », reported the Taipei Times under the title “Strong Women Irk ‘Maladjusted Men’”. While it is commonly known that gender imbalance in the workplace remains a serious challenge in most countries, we were stunned that it is considered a clinical illness in one of the most progressive societies- one where a “single” woman was just elected president and where the numbers of men and women in Parliament are equal.

We evaluated our professional positions in relation to the article. In Haiti, women are insufficiently represented in the public sector and shockingly absent from politics. Currently, zero women sit among the 122 Parliament elects and female staff typically hold low-level positions, with no decision making power. In my years of experience, I’ve noticed an increasing number of women active in the realm of international development; however, they tend to hold executive or low-level positions. Harder to find, are women in middle management positions.

My friend, the corporate lawyer, reflected that she is often the only woman at the negotiating table. Nevertheless, she believes that her clients, partners and third parties tend to give more weight to her opinion over the men’s and it does not affect her self-esteem, but rather gives her a platform to build her leadership skills. The diplomat noted that while we have become comfortable in the male dominated environments of our professions, the men around us do not necessarily feel the same, as evidenced by the newspaper article and based on her experience.  She also expressed that more women would balance the outcome of certain issues, but a higher quota of women can only be beneficial if the women are able to express their womanhood and assert their complementary roles. A colleague of hers admitted that she feels pressured to “act like a man” in the testosterone-filled workplace.

My friends and I shamelessly join conversations with men about serious topics such as business or politics that women in our own social circles frequently avoid. Our comfort to sit at the same table as men prompted us to ponder: what makes us capable to do so when the majority of women does not dare to stand anywhere near the table? Last month, The New York Times reported the results of a study suggesting that values of management need to be established as early as childhood and serve as an answer to our wonderment. The three of us attended a high school where female values were nurtured and our upbringing was undoubtedly key to our success. In my immediate family, every woman has been a contributor to the household income; the women do not hesitate to voice their opinions and convictions. They play equal roles in the decision-making process at home, are very engaged in their communities and show concern for matters of the state. Similarly, I was taught that I could influence my country’s development at a young age. I attended a political rally for the first time with my parents at the age of 14 and I have voted in every national election since turning of age. My level of engagement in decision-making platforms and the example from women in my life clearly translated into an unconscious decision to hold positions of leadership in my own field. As a business owner today, I am committed to empowering women I work with in the same way.

The influences from my upbringing motivated the culture of Ayiti Nexus. My business partner and I believe in gender equity and implement a gender centric model. It’s not about filling a quota, even though 62% of our consultants and staff are women. It’s about nurturing talent equally, giving an equal voice to men and women onboard, and empowering ourselves, as women, to boldly face anyone and every situation. In the end, it’s about learning through a Fair environment where a woman’s potential begins.