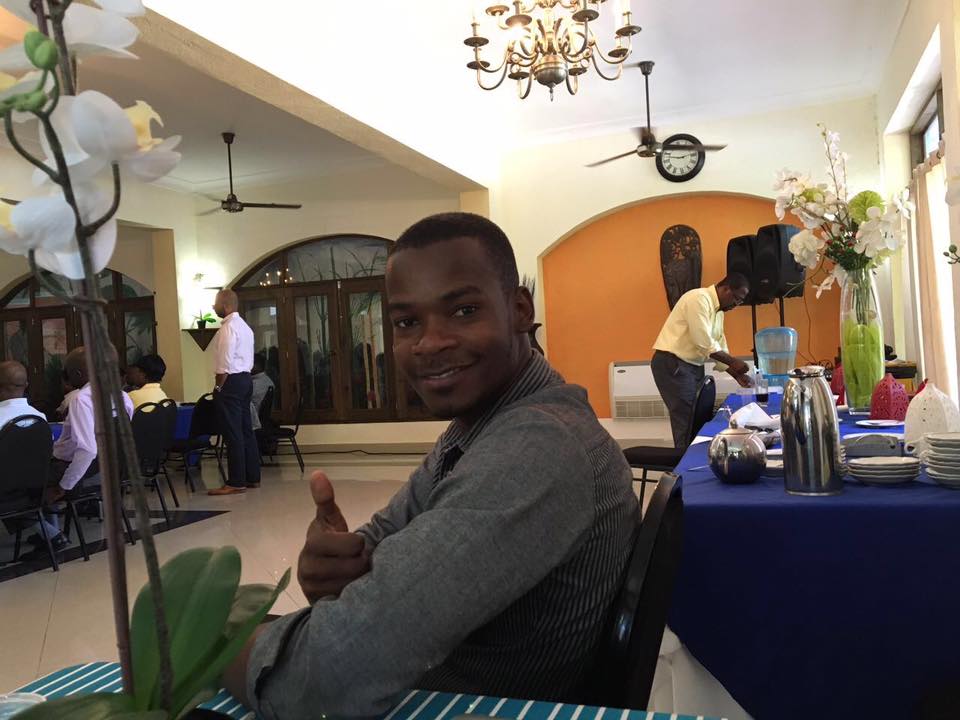 It wouldn’t be a far stretch to say that Jamesly Pierre is a by-product of Ayiti Nexus, having cut his teeth in the professional world with the boutique consulting firm since its inception in 2012. After having played almost every role within the organization, it is with bittersweet emotions that Ayiti Nexus is saying goodbye to Jamesly as he embarks on a new journey to pursue a graduate degree in Business Strategy and Entrepreneurship in the United Kingdom this coming fall.

At 26 years old, Jamesly has had quite a unique path. When he was two years old, his family migrated to the capital from the North of Haiti, to give their three children at the time a shot at a decent education. Resulting from his academic achievements in secondary school, Jamesly was selected as a scholarship recipient by the Haitian Education & Leadership Program (HELP), enabling him to pursue a dual undergraduate degree in Accounting and Finance -free of charge- at a reputable private university in Port-au-Prince. He quickly positioned himself to expand his educational experience outside of the classroom.  A few of his accomplishments include, representing Haiti at the 2012 World Summit for Education in Qatar, collaborating with international peers from top tier schools during workshops at Babson College, at Studio Banana (a Spanish firm based in Madrid), and with the Yale World Fellows. Wrapping up his undergraduate degree in style, he landed a summer internship in 2015 with a luxury boutique hotel in Newport, Rhode Island.

These back-to-back international experiences have opened Jamesly’s eyes over the five years of college on the types of practical skills needed to  excel in a variety of careers – something that he had never thought of before.  He credits Ayiti Nexus for this inspiration. Through HELP’s   Career Development Center Jamesly was placed for a summer internship with Ayiti Nexus in Cap Haitian.  Upon hearing about the internship opportunity, Jamesly was delighted to travel back to his home region assisting on a few new projects the young firm secured.   The summer proved that Jamesly had the willingness to learn, think fast and think strategically.  Jamesly was equally satisfied with the firm’s inclusive and high quality culture.  Ayiti Nexus jumped at the opportunity to keep him on board as he returned to Port-au-Prince, offering him a part-time job as an office assistant, while he conducted research for his university thesis.

Jamesly discovered the challenges of a consulting start-up in Haiti, as the firm’s leadership worked hard to position the firm on the market while attempting to find the management systems most appropriate for the size and nature of the company.  He also was exposed to fields unknown to him. His daily tasks varied from being asked to conduct desk research; contribute ideas for administrative procedures to be adopted; act as a translator/interpreter; represent the firm at various events -such as book fairs- and training opportunities (such as on environmental compliance and gender mainstreaming); assist in meetings with potential partners and high-profile clients; conduct field visits; and facilitate the recruitment of consultants and interns.

“Since that first summer internship, I saw and understood the opportunity to experience real professional growth at Ayiti Nexus; I thought it would be smart to stay with this firm that’s operating in so many sectors, allowing me to meet many different professionals I aspire to be like,” says Jamesly. “At the end of the day, Ayiti Nexus became home.” Shortly after the yearlong part-time contract ended and Jamesly recouped to write his final thesis, he was proposed his first consulting gig with the firm. That experience led to other short-term opportunities in between his travels, enabling him to develop a reputation as a capable and ambitious young professional.  As Ayiti Nexus secured its first long term client as a subcontractor under Konbit, a USAID project managed by Papyrus S.A., Jamesly became the ideal candidate for the Cap Haitien Coordinator position.

“I remember telling him that he can come to me about anything and that my door is always open.  The collaborative environment and boutique feel of our work – he quickly grasped, and dove into.  We place value on the opinions of our staff and don’t believe in the micro-management system.  Jamesly is proof that this works!”

Being exposed to the ins and the outs of the firm’s daily operations gave Jamesly some pause about his career aspirations. Before starting university, he was focused on picking a field of study that would lead to a stable job. Finance and accounting seemed like a good fit however, after working on his first projects with Ayiti Nexus, his mindset changed: why not think more broadly and more strategically about businesses and about his career specifically? Jamesly opened up to the field of organizational management to optimize the firms’ performances. He began forming the idea of someday owning his own firm where he could provide support in organizational management to other organizations and offer growth opportunities to driven youth, similar to the ones Ayiti Nexus offered him. This fall, Jamesly will begin his Master’s Degree program at Cardiff University studying Business Strategy and Entrepreneurship.

As Jamesly leaves for his studies soon, he will undoubtedly carry with him the lessons that he’s learned from Ayiti Nexus. “I am looking forward to coming back to Haiti equipped with the skills I’ve built from my time with Ayiti Nexus and the knowledge I will learn from Cardiff,” Jamesly shared. Ayiti Nexus has also learned from this experience with Jamesly. The firm’s internship program – now more structured and specific than when Jamesly started – offers diverse experiences to young professionals that are not available at most enterprises in Haiti.